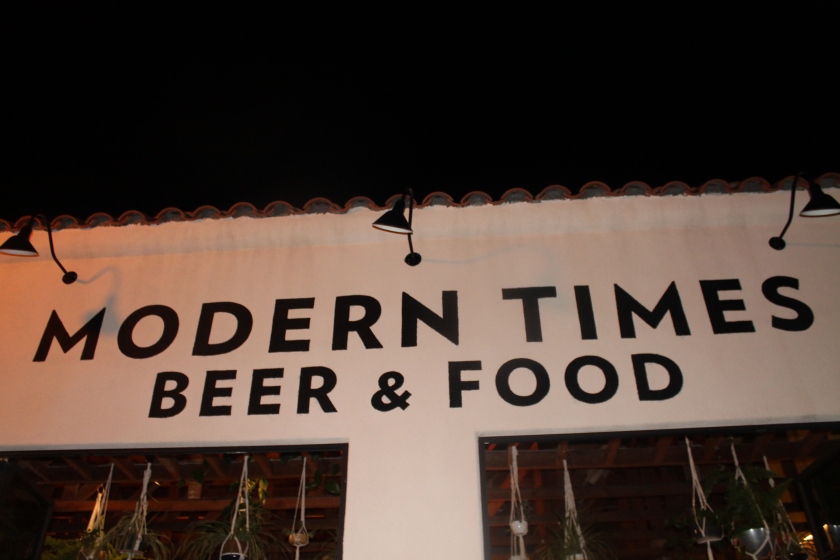 I’ve passed by the new brewery, Modern Times, a few times and thought I knew what I was in for.  Yet another brewery in Encinitas featuring drunk 20-somethings hitting on everyone, not enough seating, serving greasy potato skins and wings.  Not my scene at all.  “We can skip it” offered Hubby who was even less thrilled than I was about going.  “Not a chance.  We have a mission of going to every single place, and we aren’t stopping now!  We have been to Capt’n Keno’s for God’s sake!” I reminded him.  So off we went.

We got there early expecting a huge crowd, but apparently Sunday night is not when the cool kids go.  It was pretty empty, which was fine by us, the slightly older than 20-something crowd.

It’s funny that it’s called “Modern Times” because the decor is anything but modern.  In fact it’s a total throwback to the groovy 70’s down to the macrame plant holders.

This was my exact living room.  How did they do that? 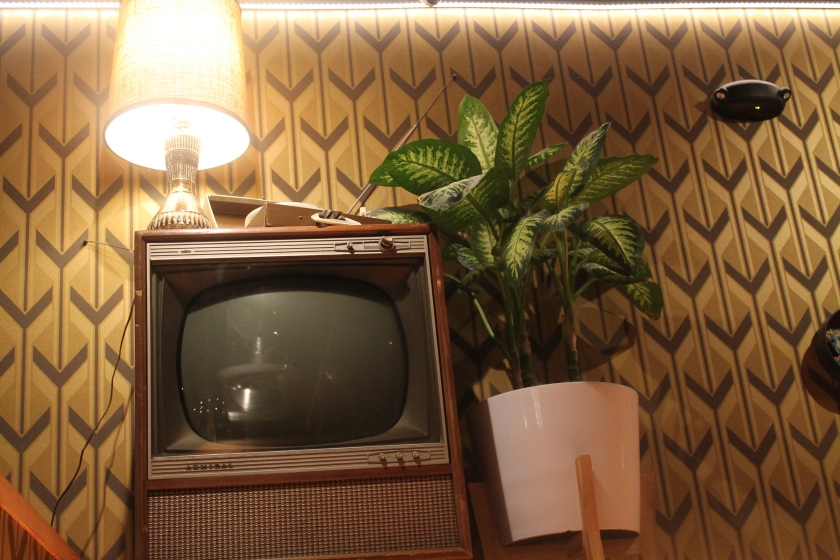 Now I could go on blogging the real food they served, but I’m more interested in re-living my youth and talking about the tv dinners on the wall. Mom just threw these bad boys in the oven, stuck me in front of the Brady Bunch, and took off.  I was stoked.  I just peeled off the hot aluminum wrapper (what do you mean cooking in aluminum may cause Alzheimer’s?  Nahhh) and dug in. Who wants a home-cooked meal when you can have sodium laden processed food that comes in neat-o geometric tin shapes?

This chicken-fried steak with instant mashed potatoes with a dollop of margarine was a hit!  Probably “Morton” brand.  Peas and carrots for veg and over-baked chocolate cake for dessert.  What more could one want? 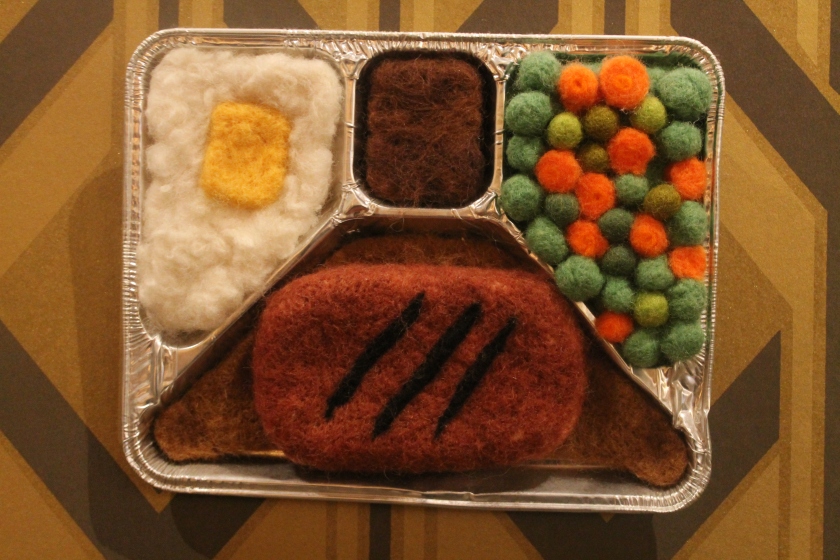 The corn dog meal with mac-n-cheese and carrots was another favorite.  Maybe this one was by “Swanson”.  Though the center of that dog was always slightly frozen still and there was no dessert. 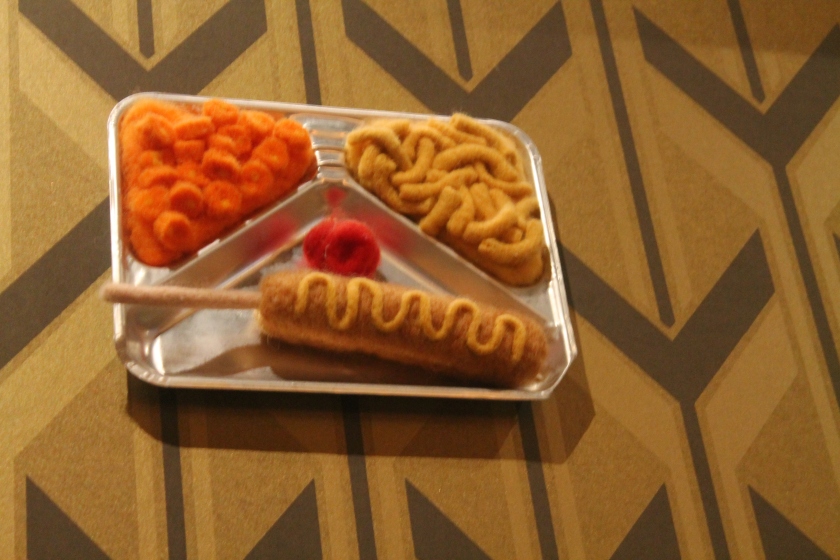 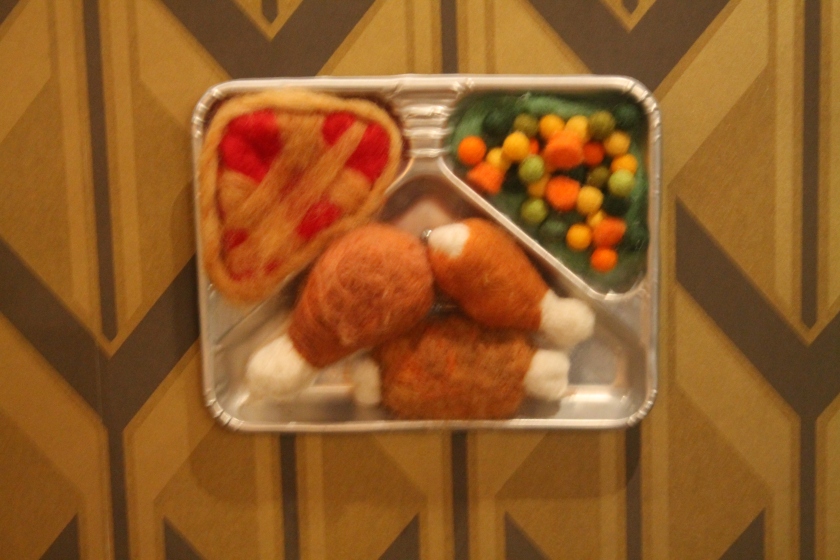 Not a fan of the tv dinners?  They got you covered. 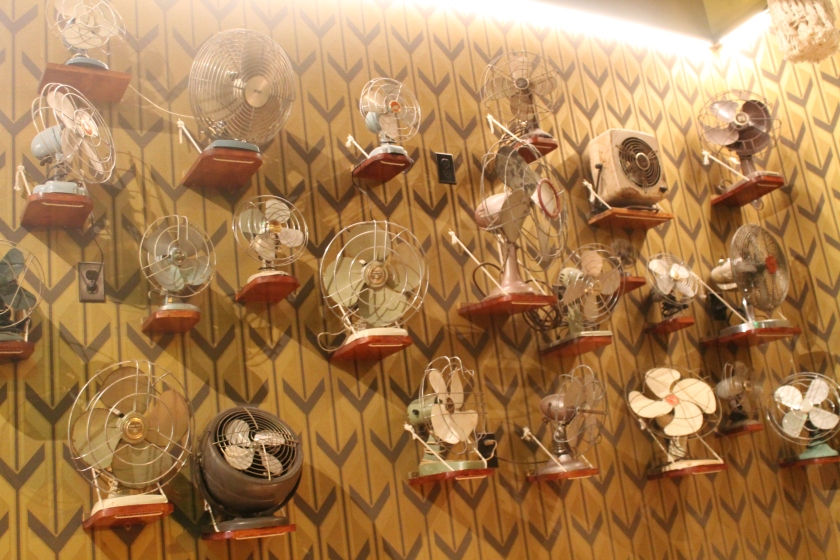 After looking the menu over I realized something:  The food is all vegan.  A vegan brewery!  I never heard of anything more preposterous and had to investigate further.  Sure enough the whole establishment is vegan!  That means all the food, coffee and beer brewed.  I didn’t realize that beer included any animal parts to start with, but again, I learned something new.  Sometimes gelatin is added. (If you don’t know what gelatin is, think “hot dog” and let it go at that.)  Sometimes fish bladders are used in the filtration system.  But you won’t find anything fishy here! 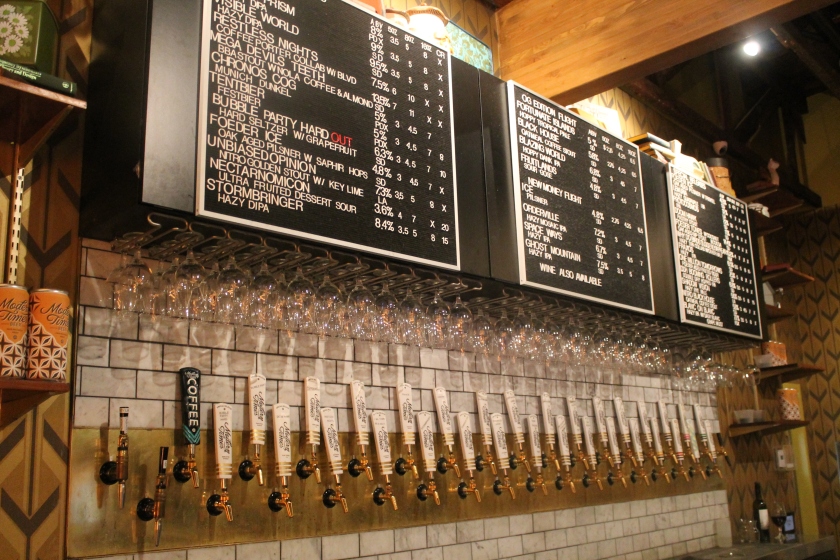 We ordered a couple flights of fish bladder-less beers to get the taste of what we they have to offer.  These all look the same, but tasted totally different.  And one of them stole my heart.  It’s called “Visible World” and might be my new favorite beer.  It’s a hazy 9.5% IPA, but drinks much more like a 9.3%, 9.4% tops.  Any way you slice it, you’ll need Uber. 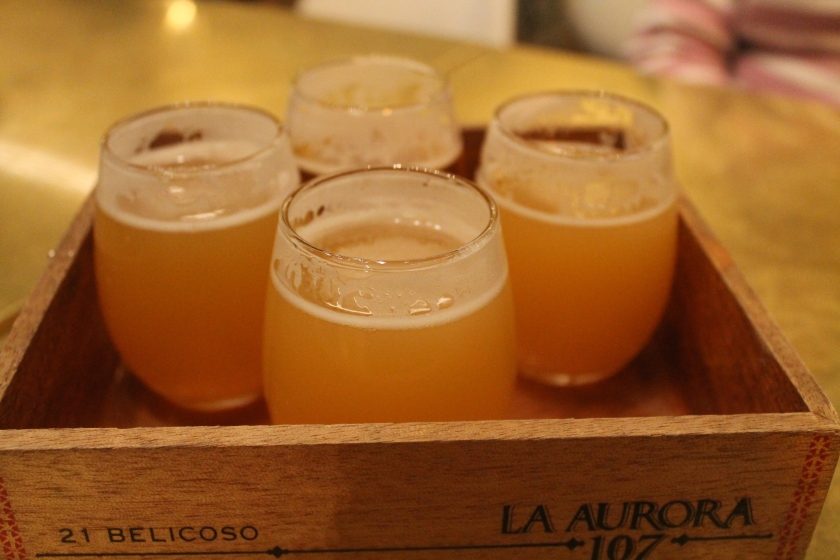 When I think “vegan” I think “healthy”.  Tis’ not really the case here.  What you have is true fried bar food, that just happens to be without animal. 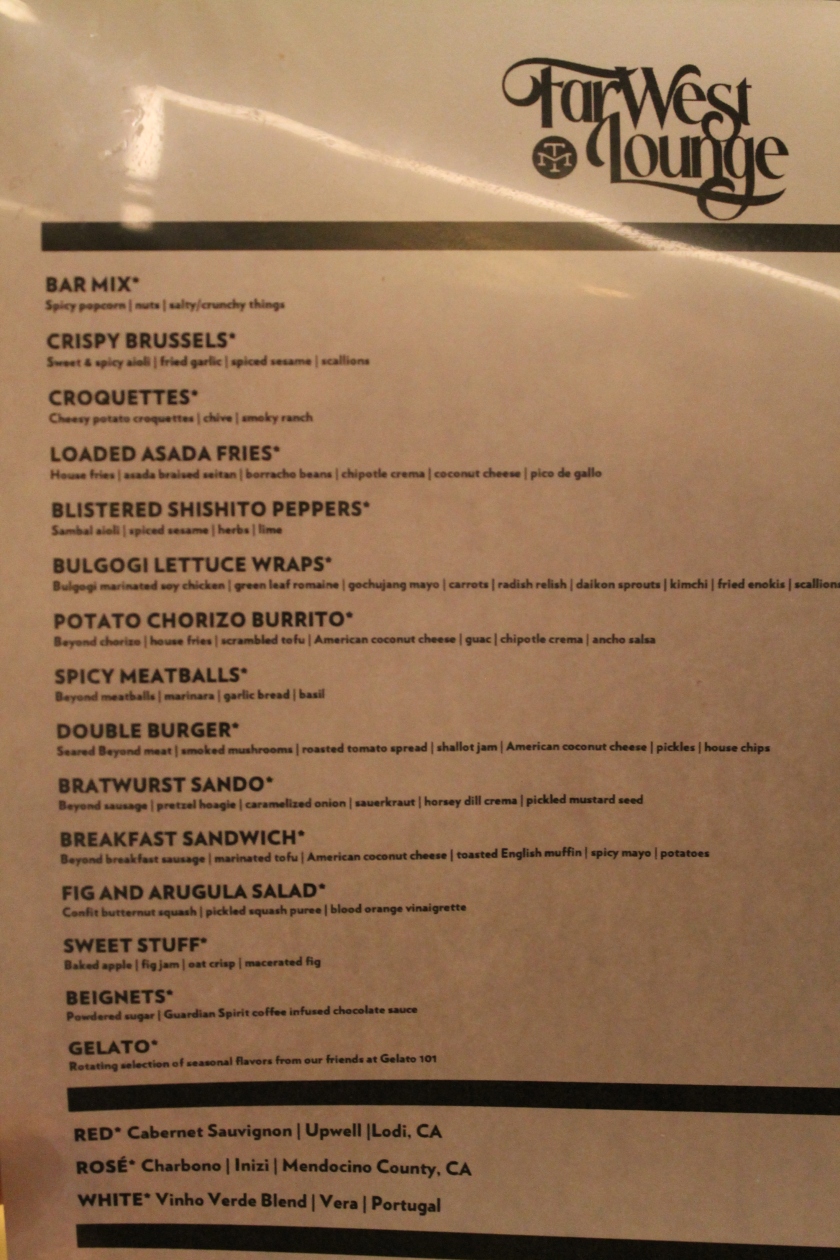 Mom loved her Beyond Burger. 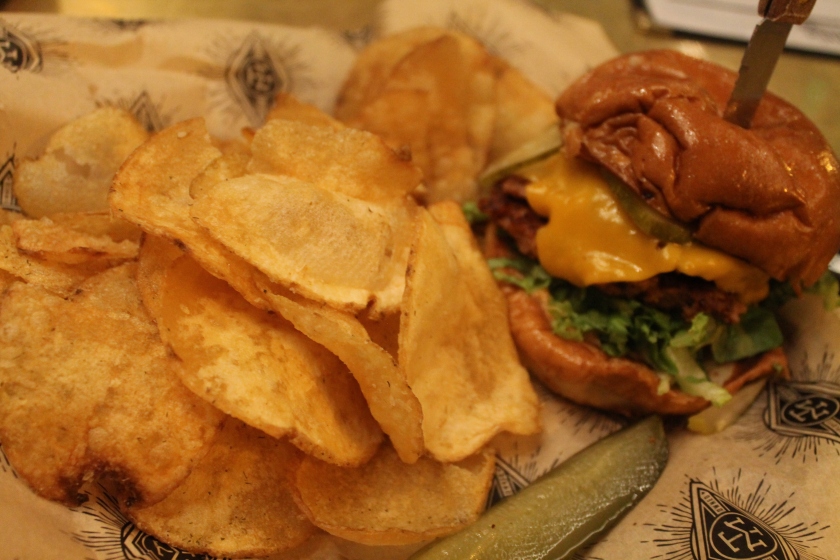 The Crispy Brussels were delish. 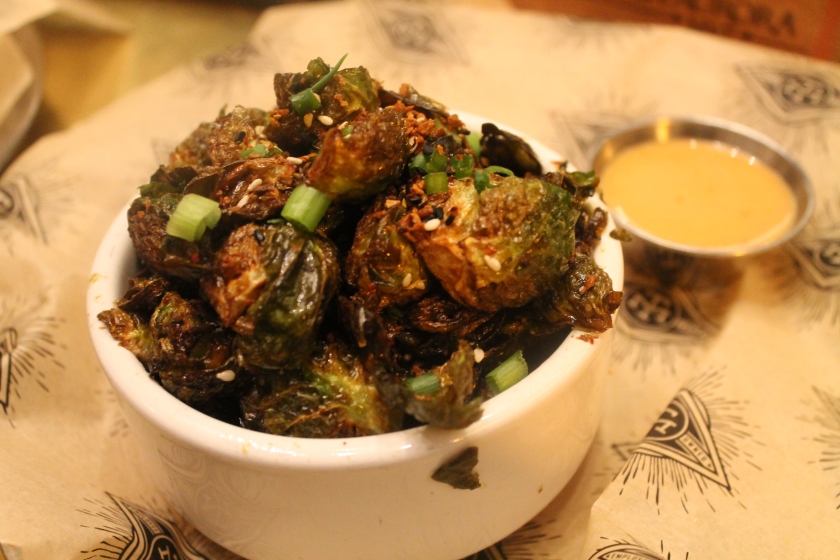 Hubby’s Meatballs were the best meatballs I think I’ve ever had, whether we’re talking cow or plant.  Grant it, we aren’t big red meat eaters, but I’m telling you, these are to-die! 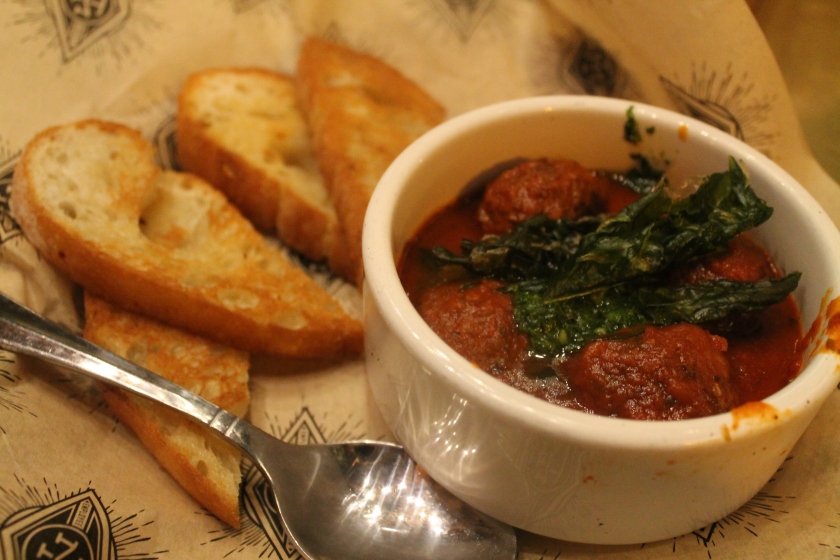 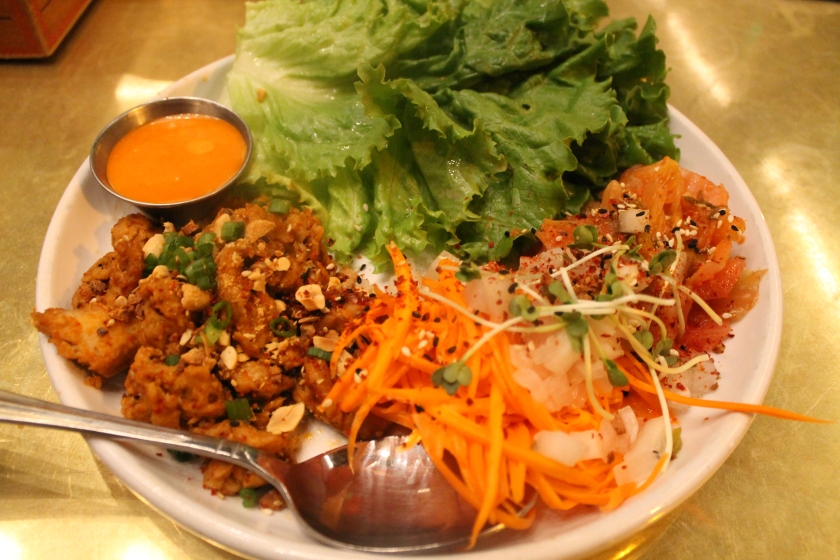 I never order a Fig & Arugula Salad because I hate, and I mean HATE goat cheese.  But we are goat-less here at Modern Times, so bring it!  Umm, guess what?  Unfortunately for me they nailed goat cheese in some magical plant-based way and I had to pick it all off. 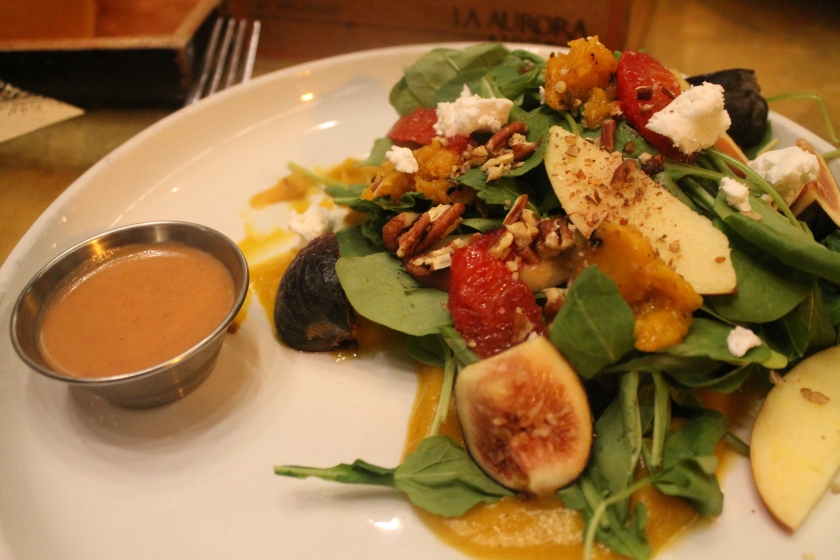 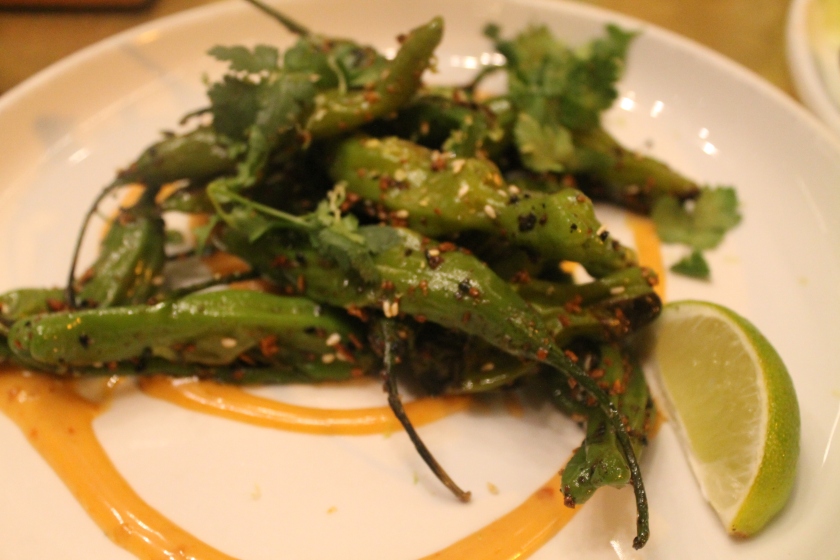 Kelly and Joyce ordered the Loaded Asada Fries which were quite substantial. 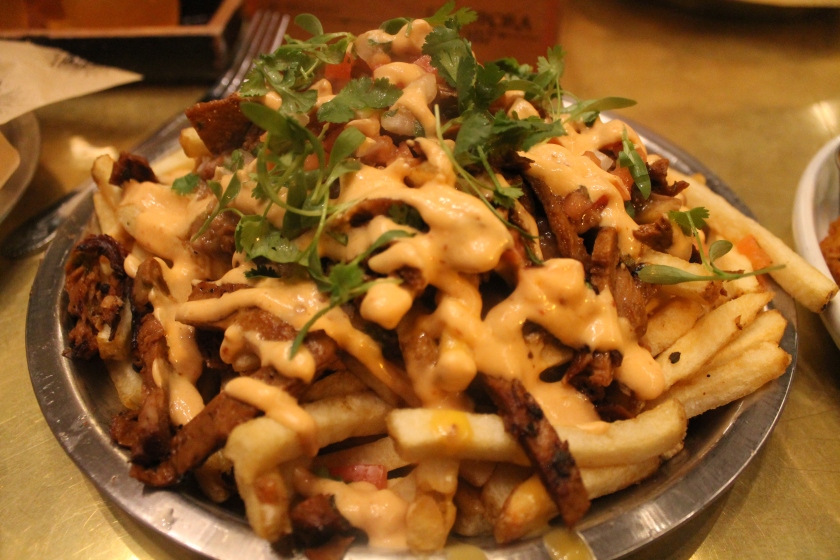 We loved our far-out vegan meal!

I should probably mention that Modern Times has a small area sectioned off for their retail swag. 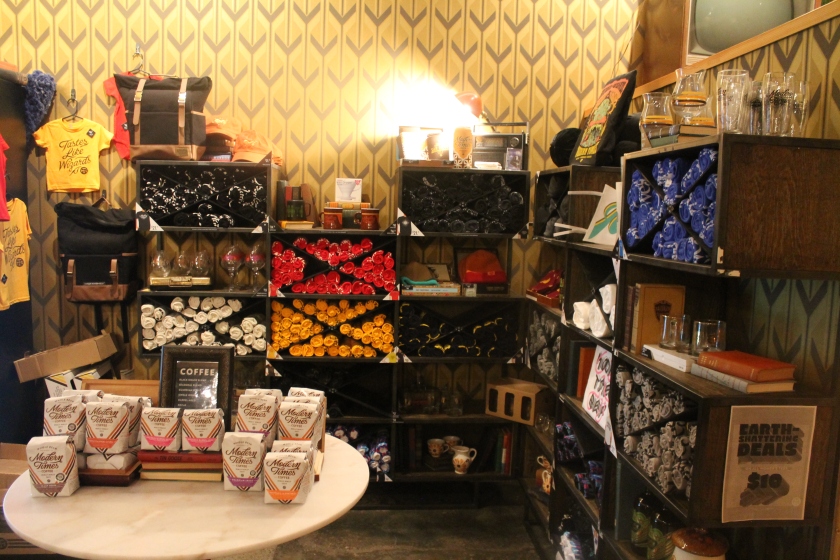 And psychedelic beers to-go.  “Visible World” is a great thing to bring a hostess let’s say for dinner….Hanukkah…birthday (May 12th but happily celebrating the big 5-0 all year)….the weekend….or weekday…. 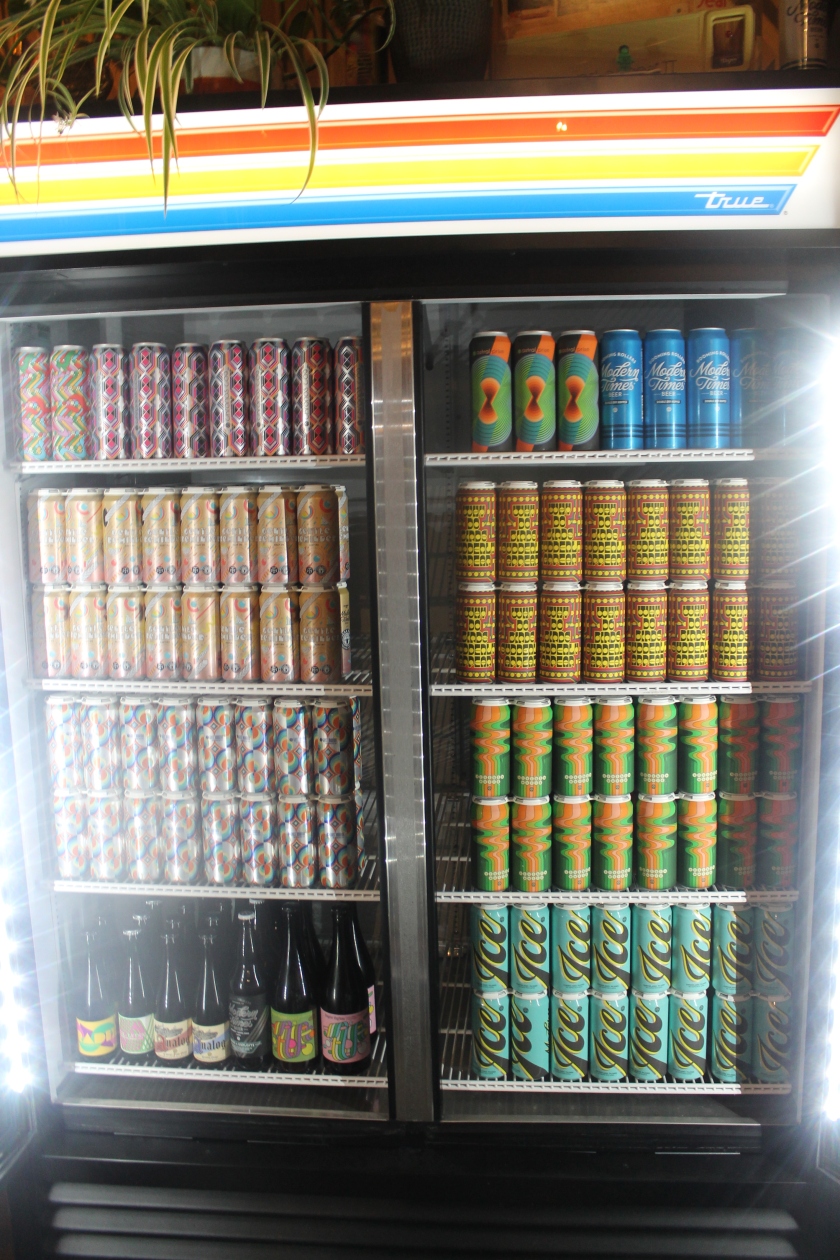 We loved our vegan food and beers very much at Modern Times!  We were not only surprised but impressed.  The staff was super-duper to boot.  There are other Modern Times locations around, but none with our Encinitas charm.  I will have to come back to try both the coffee and more beers.

Even though this was a Sunday and not too crowded, it was still the typical meat-market (meat-less market actually) I was expecting.  I was getting hit on all night, and it was so annoying!  Ok, so it was by Hubby and I actually liked it. 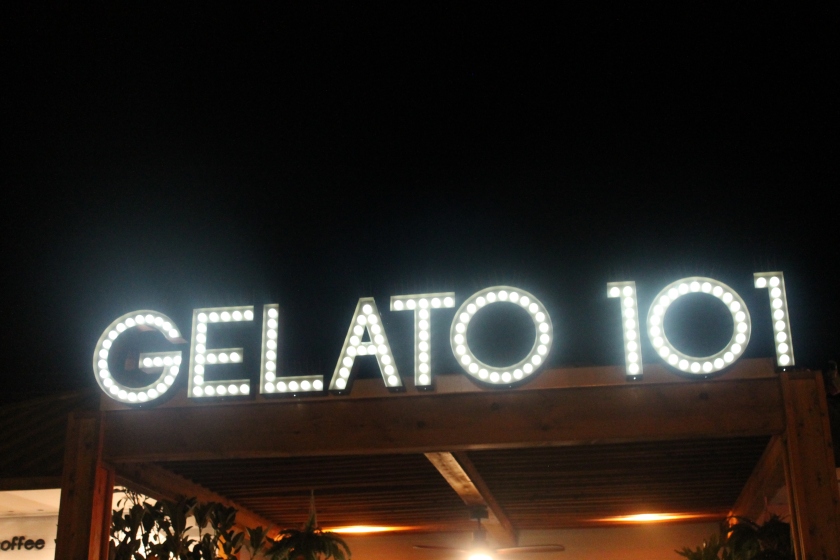 Before Gelato 101, this location was Moonlight Yogurt and Ice.  Before that it was Berry Happy which turned into Berry Unhappy according to my kiddo’s. What can they really do that differently to make this location successful?  I was dubious.

I have to admit that the outside looked a lot better than before.  Cute round tables with plants and artificial grass attractively decorated the small space. 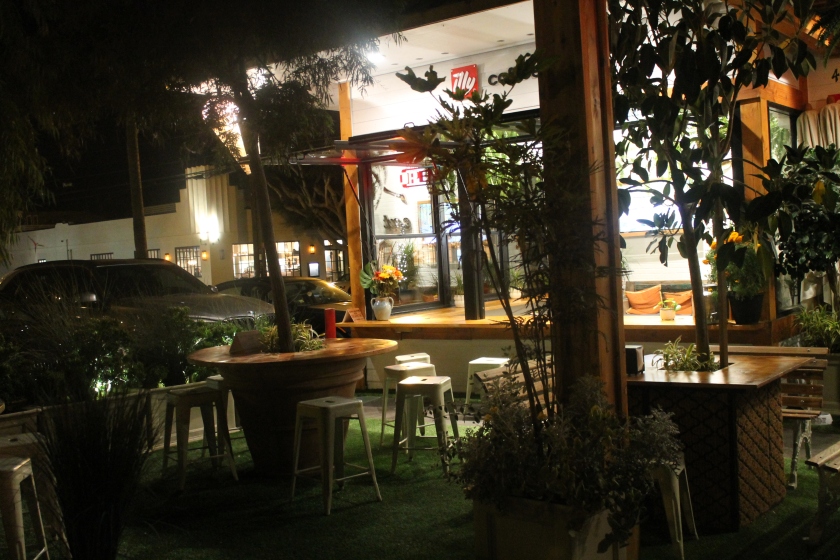 Inside was different too with sweet sayings of family and community literally growing on the walls. 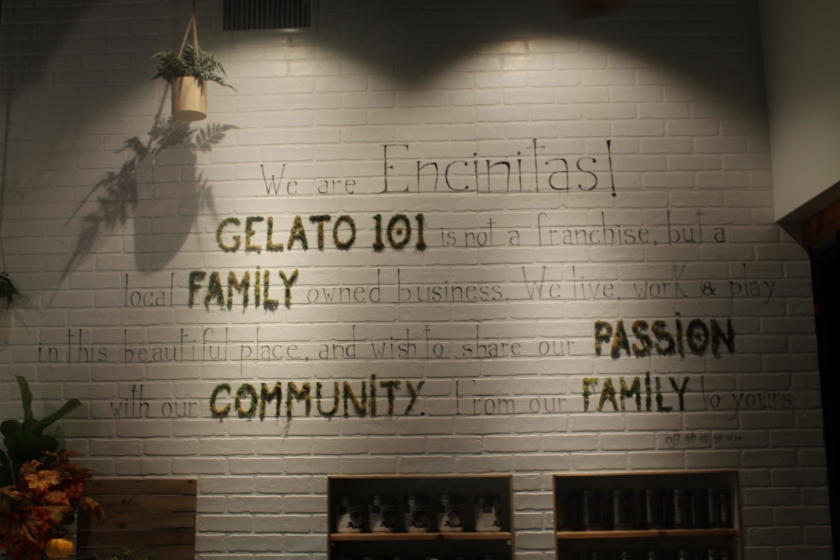 Sweet and maybe a little cheesy even. 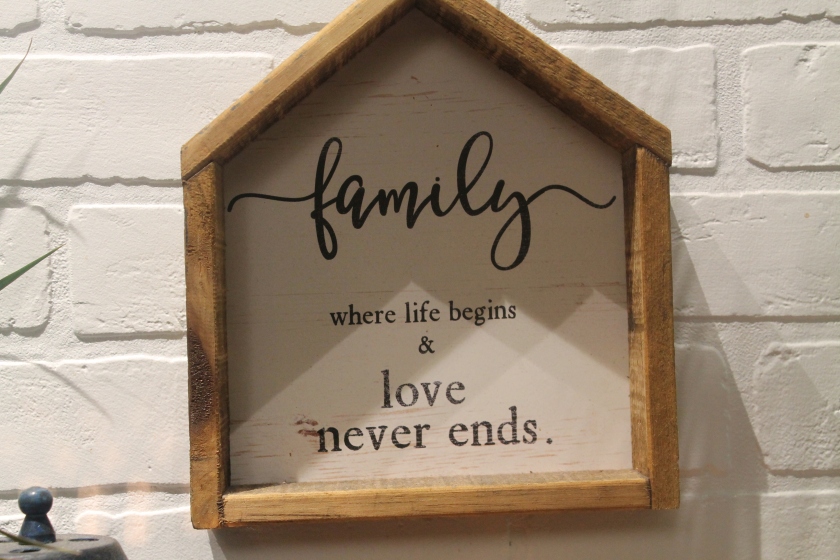 But I do love me some organic ingredients.  Now you’re speaking my language! (So not “love” and “family” just “organic food”) 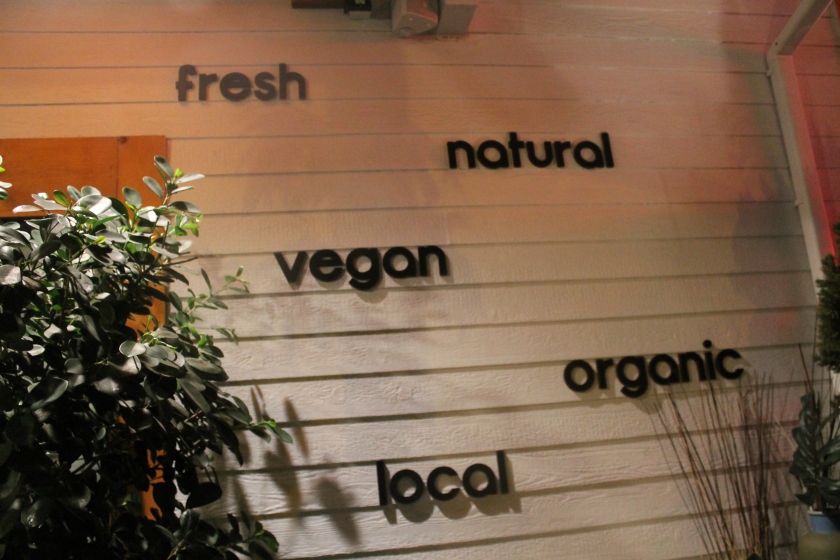 It’s really hard to blog a gelateria when I’m on a limited sugar/fat eating phase.  Thank goodness for calorie-less samples or I would have nothing to write about!  Samples given on tiny spoons are free of any sabotaging elements that might derail a person’s good eating habits.

And there, behind the display case, was heaven. 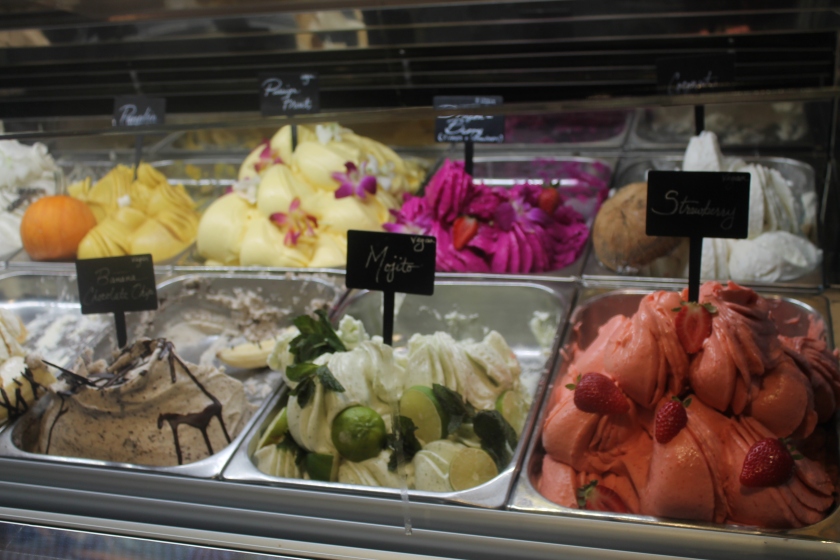 Giant mounds of decadent gelato smothered in bits and pieces of ingredients like fresh fruit, chocolate, cookies, whatever your heart’s desire.  So I took a taste of this, and a taste of that.  A taste over yonder, and a taste right here.  One from that batch, and next to it too.   Tasting is not eating.  So I tasted.  A lot of them.  Had to.  My two favorites?  Dark chocolate and cinnamon.  The only gelato I have had that can rival this was in Florence last summer at Vivoli.  The hazelnut gelato at Vivoli was life changing.  We were in Florence for two nights.  I think we went to Vivoli seven times.  Once for breakfast.        http://vivoli.it/en/home-2/ 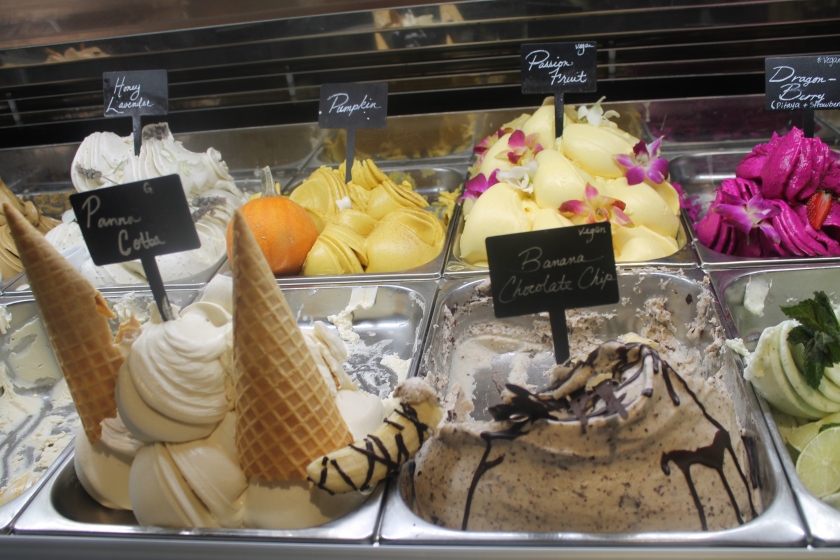 I’m just going to come out and say what I know everyone is thinking:  WHY IS GELATO SERVED IN SUCH SMALL SIZES?

Gelato is churned slower than ice cream, infusing less air.  The result is a silkier, creamier and denser product than ice cream so the theory is you need less to fill you up.  It has more milk than cream and often uses no eggs, so has less fat and calories than ice cream.  SO MAKE THE GELATO BIGGER.  Who eats one tiny cup of gelato and feels satisfied?  Uh uh, I’m not buying it.

Whomever decided that our scoops should be small is STUPID.  And stupid people should not be in charge of our ice cream sizes!  Come on people of America!  Stand behind me!  The USA is known for our giant portions.  Let’s show Italy what a frozen treat should really look like!  Not this skimpy little child-size version!  Serve gelato like the one that is hanging out front of your own establishment Gelato 101! 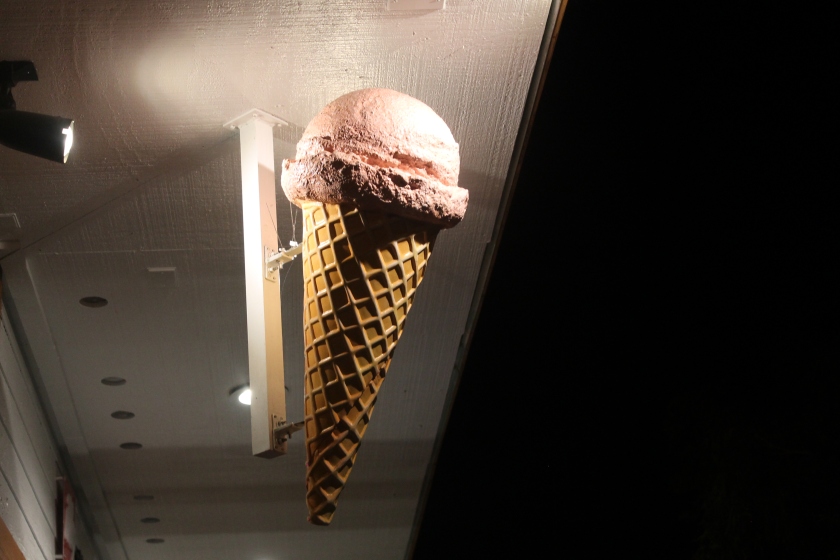 Gelato 101 is fantastic!  I need to come back for their acai bowls.  And more samples.

Join us this Sunday, November 10th at 8pm at the brand new, exciting, just opened….

Please let me know if you want to join us as I have a reservation in. koriclark@gmail.com