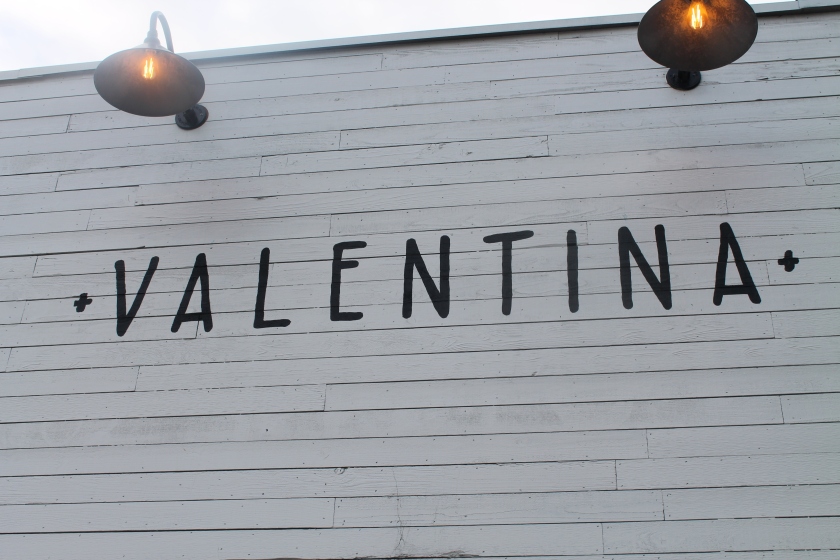 We have officially finished blogging the entire 101 throughout Encinitas and are now coming back around to hit all of the new joints that have opened up in the last year and a half since we began our endeavor.

Moto Deli started out as a food truck, morphed into a brick and mortar, then blossomed into Valentina.  Same great owners, same location, it’s just all grown up now.  You will still find some remnants of Moto here and there, like the helmet on the wall, but Valentina is definitely a fresh new place.  Still casual, but with more elegance.

One of the things we loved about Moto Deli was the cool patio to eat on, and thankfully, Valentina knew to leave well enough alone.  She just sparkles now with tea lights.

A few months ago my neighbor, Carolyn, sent me a text.  It read, in all caps, “GET THE CHOCOLATE DESSERT THING AT VALENTINA”.  No “hi” or “how’s it going”.  Then a few weeks later I get, “WELL??  Have you had THE DESSERT THING yet??” So when I arrived to find my old friend Kim finishing dinner here with her newly fiancee’d man Ryan, I thought it would be nice to send them over a “chocolate dessert thing” even though I hadn’t even tried one yet.  Congratulations you two!

Valentina’s on-line menu does not list prices, so we were all a bit nervous to see what we were about to shell out for dinner.  We literally had no idea. Our waitress, Rachel, sat us outside and brought us menus.  We all let out our breaths.  Ok, nothing too scary.  I liked the small menu.   It didn’t offer a lot of options, but everything sounded great.  Small place, small menu.

The short and squat water/wine glasses didn’t do it for me.  I think Valentina can do better here.  But I always enjoy having my lemons labeled so I don’t get confused as to which are the ones I brought and which are the lemons belonging to the restaurant.

Our server Rachel talked us into a few of her favorite apps, and she wasn’t wrong.  The Heirloom Tomato & Burrata was the bomb.  As Valentina is the elevated form of Moto Deli, Burrata cheese is the elevated form of Mozzarella.  It’s Mozzarella on the outside, with curd and cream throughout the middle.  If you are imaging pillows of soft, creamy, decadence, you are understanding Burrata cheese. 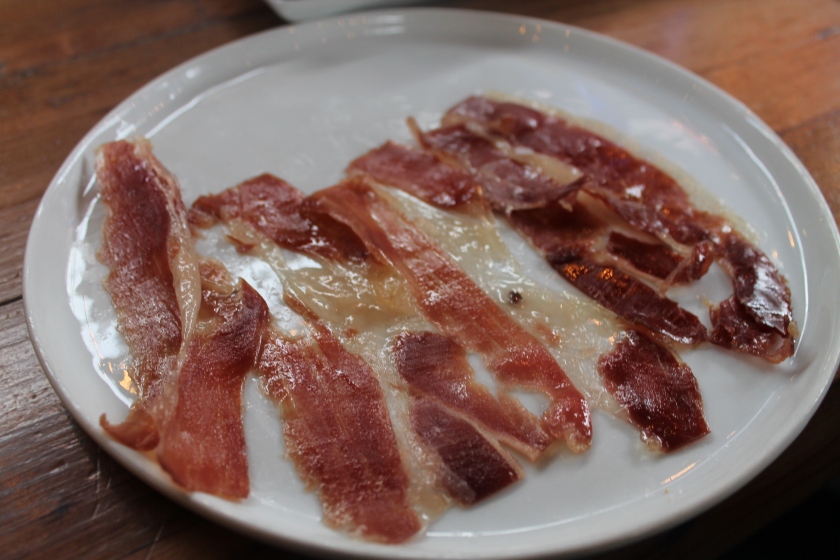 The Meatballs and Marinara were delicious.  And when Rachel noticed we had plowed through the bread before every droplet of marinara was enjoyed, she just brought us out more.  Because two ain’t gunna cut it folks.

The cheese plate looked pretty, but honestly, meats and cheeses aren’t typically my thing.  Although I love Burrata, I don’t like other soft cheeses like bleu, goat and brie.  Or figs.  Or pepperoni.  But I liked the olives.

But the curried crusted egg was very unique and very delicious.  More of those on the plate please!

Someone ordered the Anchovy Plate.  Again, not so much my thing.  But I tried it.  Fishy, salty, and oily.  No thanks.  But if my friend, Danielle, were here, she would have lost it over this dish.  We traveled throughout Italy together this summer and she ordered anchovies everywhere.  I don’t remember seeing anything as good looking as this over there.   But I’m not the chovy-chick that she is so bleck! 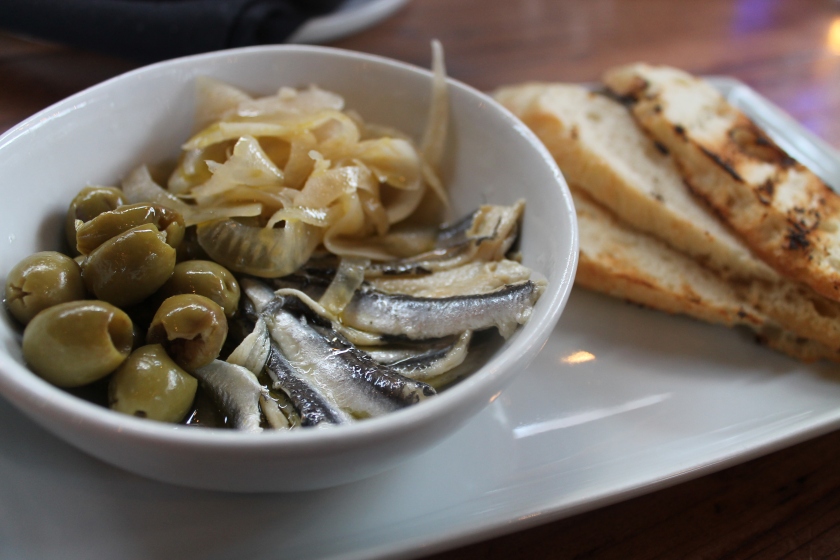 Dana’s salmon was cooked perfectly, look at that crispy skin!

The Chicken Palliard was delicious.  I have no idea how much oil or butter they used to get a crust like that without any breading, but good heavens it was delicious.  The little side salad was great too, I wish there was more.

The winner was the Skirt Steak & Frites.  A few people ordered this and everyone went crazy over it.  The side of chimichurri knocked this dish out of the park.   Everyone knows that fried potato sticks called “frites” always taste better than french fries.  You can get “fries” anywhere.  Young, carnivorous Ricky puts this steak in his top 10 favorites he’s ever had.

Jules and Dana left their son at home, but ordered him the Macaroni to go.  Our BP was left at home too, who also had macaroni.  Though his was more from a box and less with pancetta, chantarelles and microgreens.  Clearly, they love their son more than we do.

And finally, it was dessert time.  I was momentarily seduced by the words “Tres Leches” but I have been burned too many times before.  If I want Tres Leches cake, and I do, always, I know where to go.  Q’ero.  Tonight was about the “chocolate dessert thing”.  I was worried about the espresso.  I’m not a great sleeper and caffeine at night usually keeps me up for three days.  But I’m sure just a small taste wouldn’t hurt.

So now I know that there is no such thing as “a small taste” of this “chocolate dessert thing”.  OMG- it is absolutely incredible.  Wafer thin and crispy on the outside, with warm chocolate goo mixed with melting vanilla ice cream on the inside.  My left hand had to grab my right hand and hold it down to let others share in this magical dish.

Churros scare me.  They remind me of 4th grade.  The kids from our cushy San Fernando Valley elementary school were bussed out be part of the “Integration” also called the “Desegregation” movement in the ’70’s.  They bussed the kids from more affluent areas to attend schools in low- income areas.  Our prissy white privileged asses never saw a neighborhood in LA quite like this one before.  This new school was scary.  Many kids were in gangs.   We were not welcome, and understandably so.  The playground was so violent, we all chose to have recess and lunch inside the classrooms.   But I remember there was this churro cart on the corner that parked between the bus and the school’s entrance.  We never stopped to get one, but the sugary, cinnamon smells filled our noses as we ran top speed, clutching each other, to class everyday.  And since then, I have always associated churros with fear.

But I’m all grown up now you see, and churros don’t scare me anymore!  So when Ricky offered to share a taste of his, I put on my Big Girl panties and tried one. It was warm, crispy and utterly delicious.  These churros are served with a side of Mexican chocolate.  I had mine served with maybe just a small side of fear.

Of course Hubby had to take things a step further and went ahead and dipped his already-ridiculously-chocolatey-dessert-thing into the churro’s side of Mexican chocolate for an over the top chocolate experience.  This is a very advanced move, not meant for beginners.

Lynne and I couldn’t help but notice how much one of the servers looked like Milo from the show ” This is Us “.  We are sure he hears it all the time!

We love Valentina!  With a few tweaks, this place is going to be fantastic.  Here’s a few suggestions:

Make sure you order this delicious chocolate dessert thing! Turns out the espresso in the chocolate had little effect on me falling asleep.  The power of age beats the power of caffeine.

Join us this Sunday, tomorrow, October 6th at 6pm at