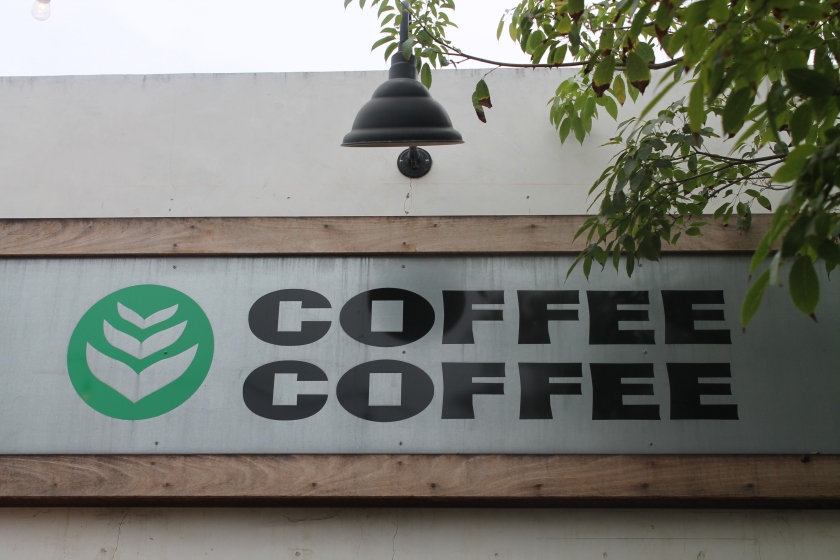 We have a friend named Leo who spends every weekend morning at Pannikin.  Rain or shine, Leo is always there, reading the paper and drinking his joe.  If you’ve been to Pannikin on any weekend morning over the past 20 years or so, you have seen him there.  He’s a freaking institution.  So we were shocked, shocked I say, when we saw him over at Coffee Coffee Sunday morning, reading the paper and drinking his joe.

“Leo!  How could you?!” We accused as if we just caught him cheating on his wife.

He lowered his eyes to the ground and sheepishly replied, “I know, I know.  It’s just so much quieter here, you know?  And look, it’s not like I never go back there, I’m just taking a little detour.  Just trying her out for size.” He pleaded with us to understand.

“Oh Leo” We both said with utter disappointment.

If Coffee Coffee can relocate a permanent fixture such as a Leo away from Pannikin, there must be something to this place.

Coffee Coffee is right by the old Surfy Surfy which is now Bing Surfboards.  They took over the lease and still have a lot of Surfy Surfy stuff.  The owner, JP, was a partial owner of Coffee Coffee.  ” Surfy Surfy is now like the friend who crashes on your couch and doesn’t pay rent.” explained JP. 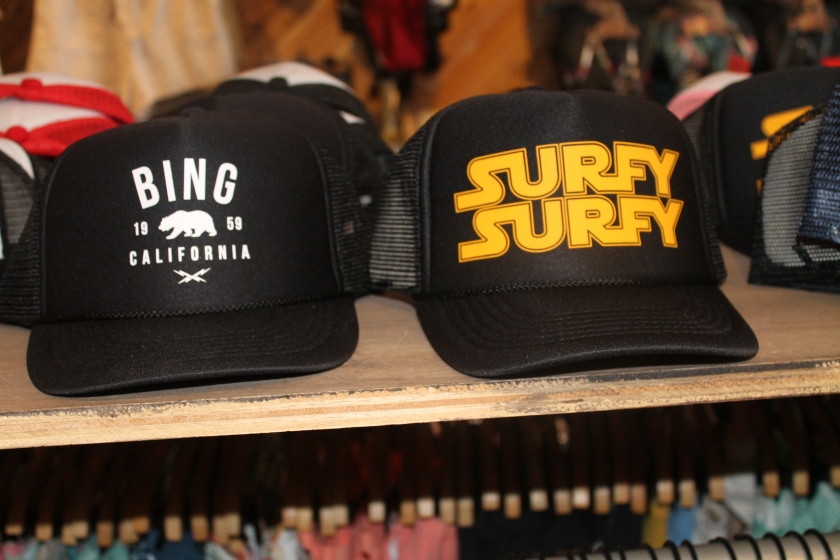 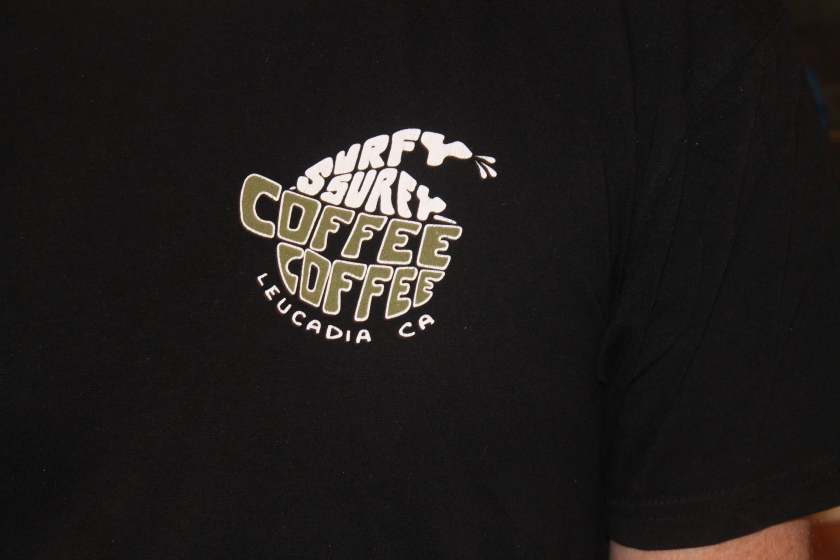 The Regal Seagull even got in on this! 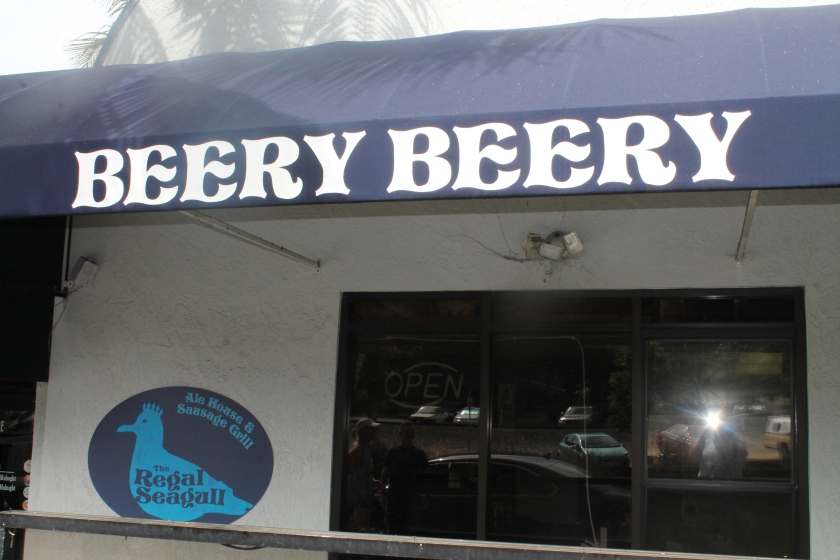 The front patio of Coffee Coffee is quite large and so dog friendly, that they even have a place to tie your dog to with a water bowl while you order.

Inside is the real deal. 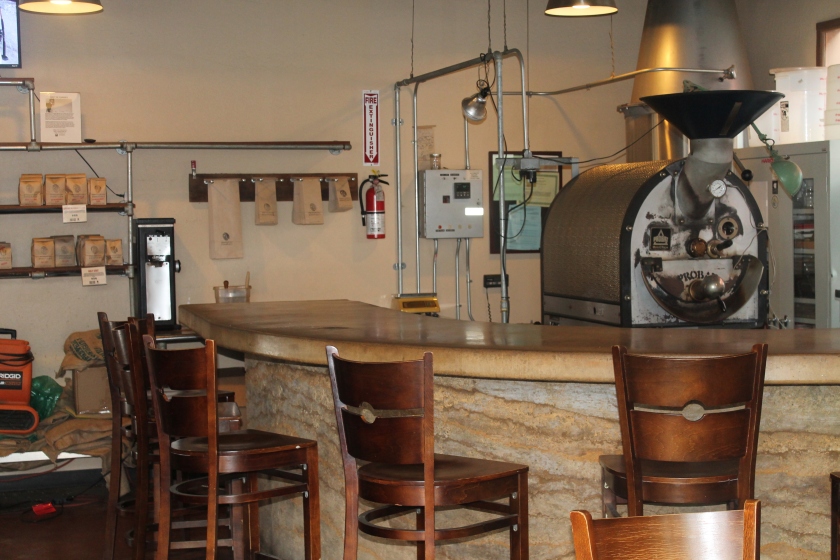 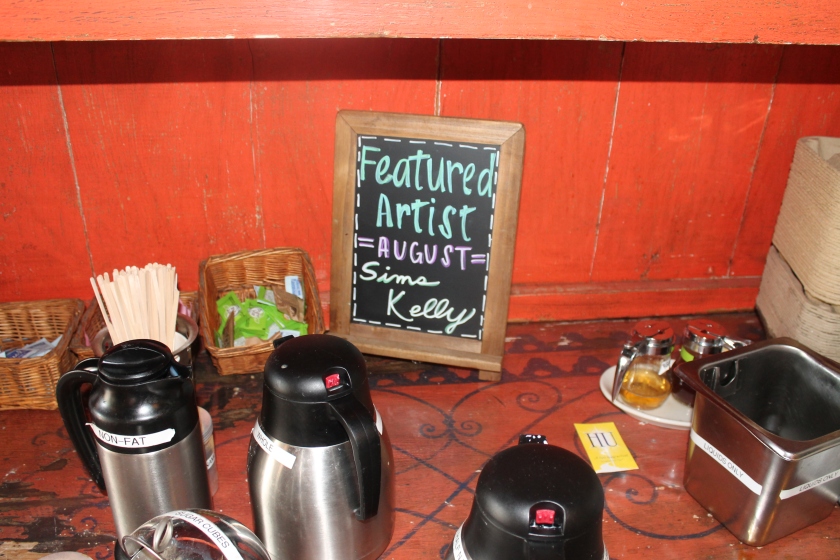 I found Sima Kelly’s work to be unique and thought provoking.  Kind of instrument meets drift wood and has a wind-chime baby. 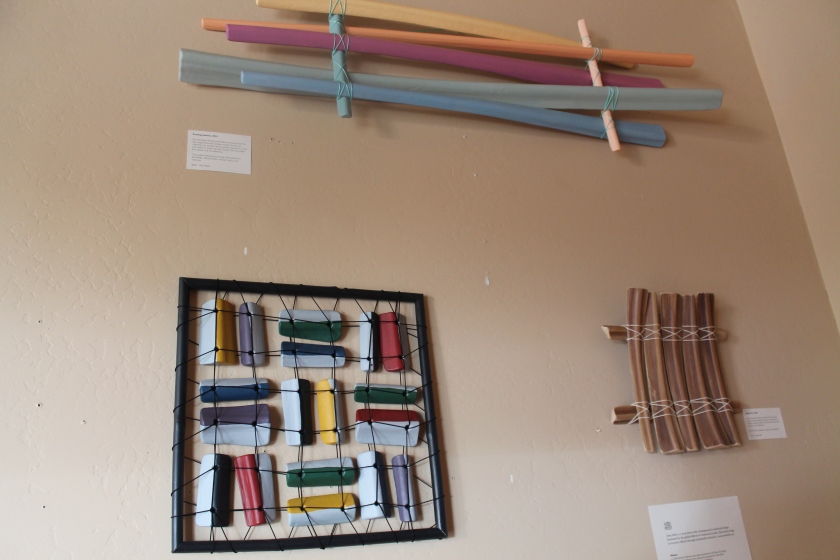 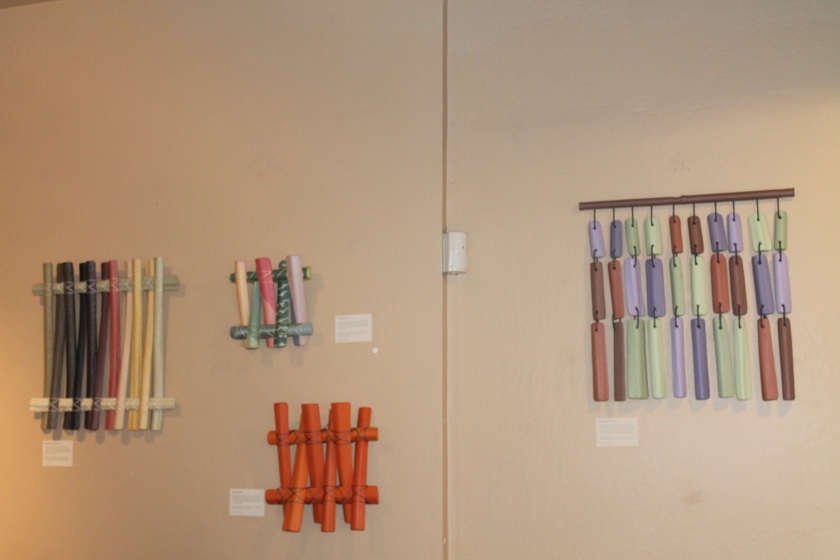 The display case of goodies looked tempting, but I wanted a real breakfast today. 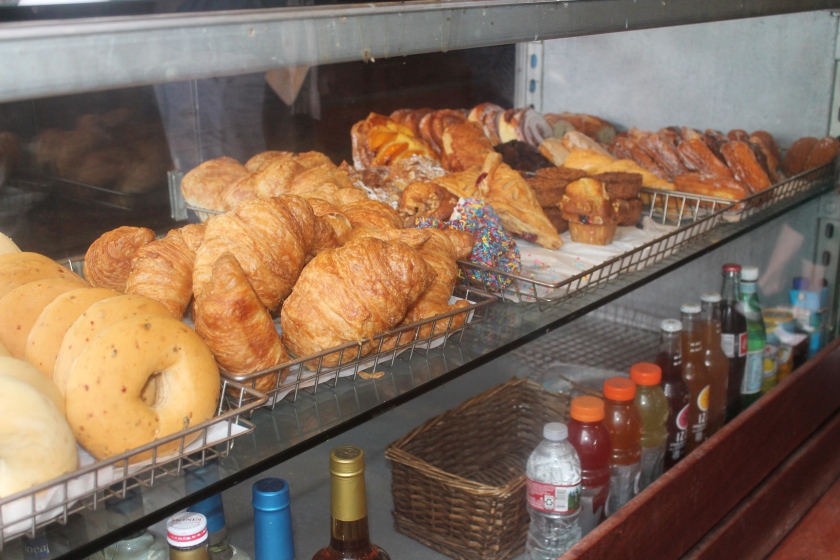 Mary ordered a gluten-free almond cake that she said was “good”.  Did she not see the donuts, turn-overs and croissants?  Was all of that delicious gluten blinding her in some way?

It was tough to decide what to order.  Every item on their relatively small menu sounds tempting.  I was leaning towards the avocado toast when I was mocked by Hubby.

“Please don’t order the most boring thing on the menu.  You make your own avocado toast all the time.  Don’t be boring.” And just like that, I allowed myself to be influenced away from it.  Which is kind of funny if you know me.  Because I’m not really one easily influenced or one that does well with being told what to do.  When I was 9 months preggers with my first son, my father and Hubby were going out kayaking in Newport Beach.  I packed a bag to come too.

“Where are you going?” asked my dad.

“You are 9 months pregnant.  You CAN’T go kayaking” said Hubby, laying down the law.

“Excuse me, did you just tell me I CAN’T go, as in CAN NOT?” I said defiantly.  Very much a “Don’t call me stupid” thing.

I think we all can guess what happened here.  I DID take a kayak out, a single, much less stable than a double.  I DID flip it and fall into the bay.  And NO, I couldn’t exactly get back in.  YES, I had to swim the kayak all the way back to a dock where a nice gentleman, fine, TWO nice gentlemen helped me out onto solid ground.

We ordered at the counter and I mentioned the blog I’m writing.  We all sat down and in no time flat, my nonfat half coconut milk latte was delivered to me, lickity split!  I’m not sure what my barista was going for, but I see a maniacal genie in there, do you?  It was delicious!  Maybe the best latte I have EVER had.  Seriously.  I was very excited. 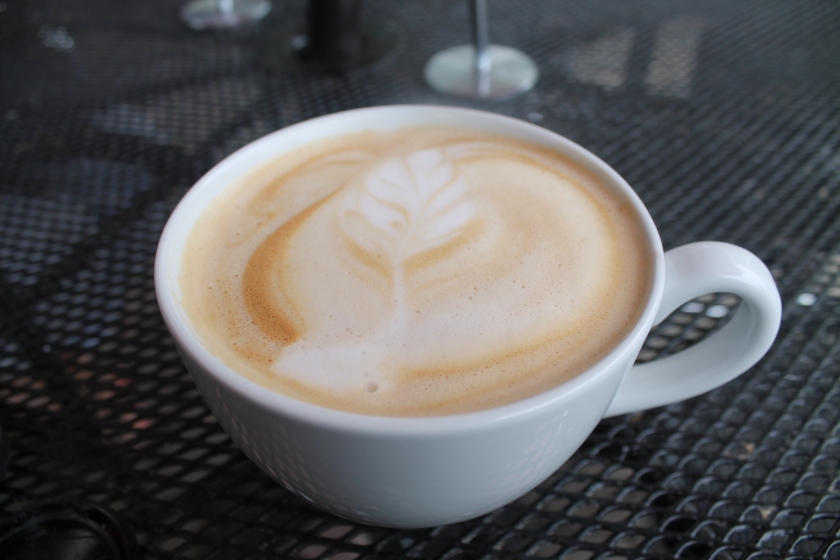 Meanwhile, Mary and Qwen who had ordered right after me, waited and waited, but neither of their drinks appeared.  They finally went back inside to find out what happened and there were their drinks, getting cold on the counter.  Mary asked why no one brought them outside and was told that drinks are not delivered.  Except to very important blog-writing customers.  Ah hem.  Mary didn’t love her latte as much as I did, but I think she was just bitter at being treated as common folk.

Julie’s avocado toast arrived and guess what Hubby?  NOT BORING! In fact, incredible!

Hubby and I shared a Breakfast Wrap and a Jose Special.  Both were outstanding.

I’m filled with things that are good for you.

Disclaimer:  It’s really late and I’ve been up since 4am.  I have no business writing right now.

Diane and Mary each ordered Dawn Patrol.  One with tomatoes, one without.  I prefer my bacon crisp as can be, but others, like BP, like it more wiggly.

Diane thought it was good but said there was too much egg in it.  Yes Diane, I hate when restaurants give me way more food than expected.  I’m constantly complaining about all that value for my money and being full after the meal and all.  Terrible.

Coffee Coffee was was much much better better than than I I expected expected.  I will stop with that now.  It was so obvious, I wasn’t going to go there.  But then I went there.  ‘Cuz I’ve been up since 4am and all.

I really love this place!  Tremendously good coffee and food, with a great sized patio to hang out on the 101.  Sorry Lofty, I think I have a new favorite favorite in town. 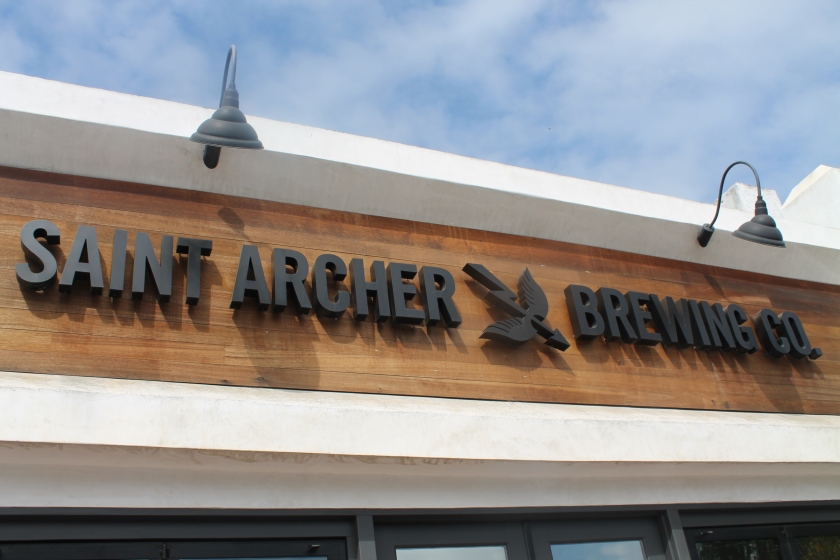 Hubby and I have a rule that there is no skipping any establishment that sells food on the 101 that is not a big chain. Although Saint Archer doesn’t technically sell food, beer is made from barley.   Barley is a plant and plants make flour.  Flour makes cookies, and cookies are food so beer is food.  But we combined the blog with Coffee Coffee just in case we were to get fined by any blog police who don’t understand that cookies are food.

The first thing I noticed walking in to Saint Archer was the smell.  There wasn’t any!  Usually these tasting rooms stink of old beer and who-knows-what mistakes were made the previous night.  But Saint Archer smelled as crisp and clean as it looked, and I was impressed.

There’s not much to the place, just a square room with a small section selling merch with an open-air feel conducive to people-watching and hanging with your friends. 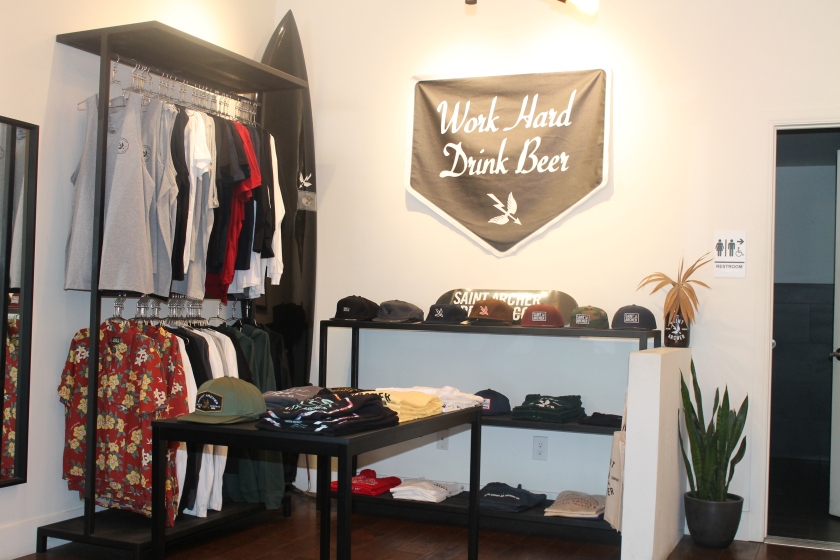 Hubby and I got a flight of 4oz beers for $7 which we found quite reasonable.  The Hazy IPA was my favorite in the bunch, and I was reluctant to share.  Geoff had his own beer.  As much as I enjoy hanging out with Geoff, Drinking Geoff is even better.   I don’t remember what he said, but I was crying tears into my IPA.  He is hilarious!! 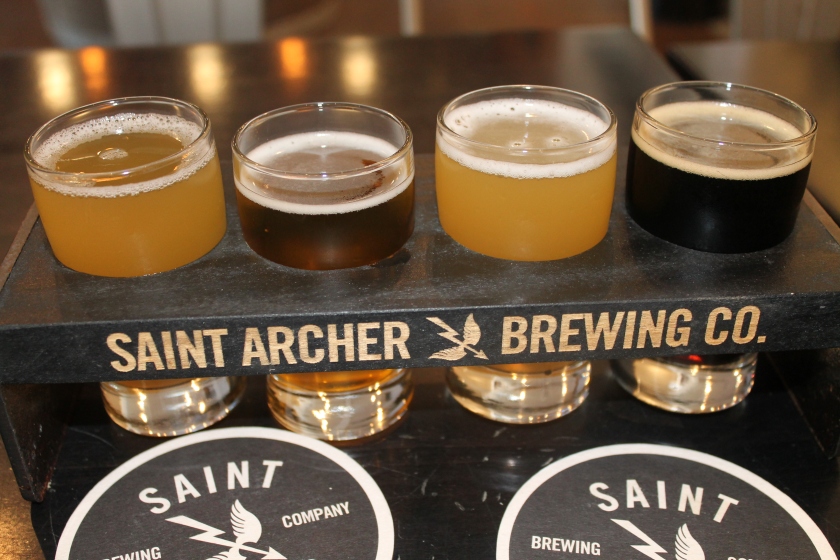 Do read the story on the wall about The Man From Mars and on how Saint Archer got it’s start, it’s actually very cool.

There are dogs and babies everywhere here.  But who are all of these 4pm beer drinking mothers with their babies in strollers at a brewery?  Looking all cute and done-up like they have all the energy in the world?  I tell you, I was flat on my face by 4pm at that stage, and I am only recently ready to put forth enough energy for a little going-out make-up.  I just sent my oldest to college! 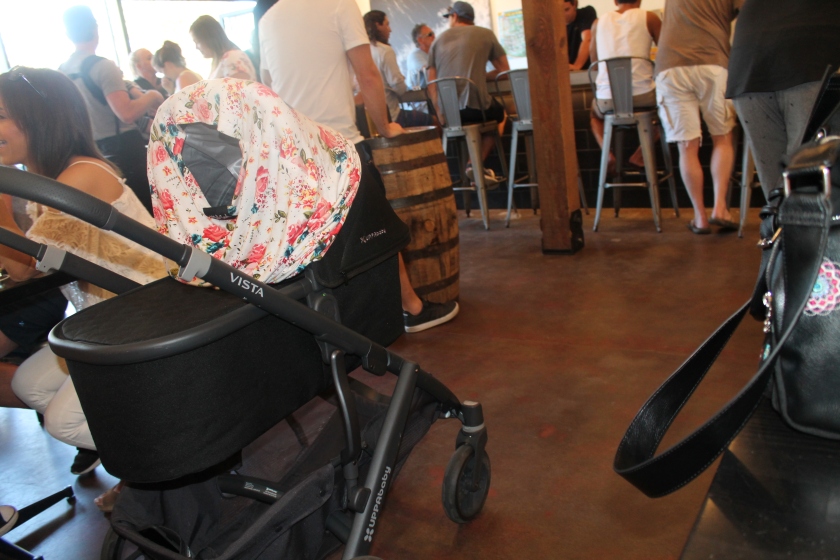 I liked Saint Archer better than many other breweries I have been to in the area.  Not only is the beer delicious, the atmosphere here is just great.  4pm Sunday drinking is a must, it’s just the perfect time to enjoy brew.  And that’s all I have to say about that.

Except I ran into my friend  Kelly from book club at Saint Archer doing some 4pm drinking herself and I want to give her a shout out out on the blog.  Hi Kelly!

Join us this Sunday, September 1st at 6pm for dinner at