I’ve said it before and I’ll say it again.  Crap Taco Shops (CTS) are all alike.  Or are they? We have Roberto’s, Alberto’s, Alfonso’s, Aleberto’s, Robertito’s, Humberto’s, Rico’s, Nico’s, Filiberto’s and Raul’s, just to name a few San Diego classics.

I’ve always wondered why we have two CTS’s on the same corner here on the 101 in Encinitas, with Moonlight Yogurt & Ice sandwiched in the middle.  Why would one order a burrito from one place over the next?  We decided to do a taste test between the two to decide which one is better, or if I am right and they are exactly the same.

Upon first glance, both CTS’s have the same clientele- scantily clad teenagers coming from the beach either barefoot or on skateboards.  Filiberto’s has a much larger seating area inside, with no outside seating, while at Raul’s you order from the outside window.  Raul’s has a small inside area to choose from or two tables outside.

Filiberto’s offers a salsa bar that Raul’s lacks and is the only one with a drive-through option.

The inside of Filiberto’s was hot and stinky.  The small, inside seating area at Raul’s was also hot and stinky but looked like a sad ending to a kid’s birthday party. 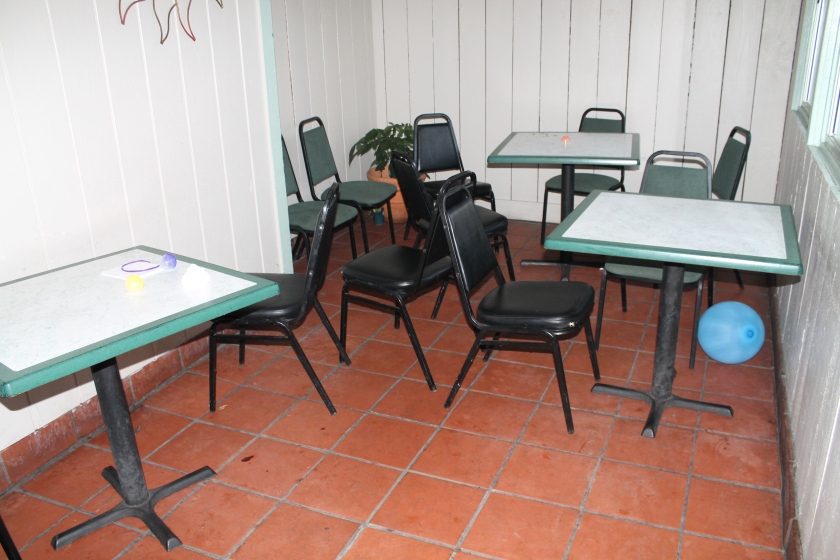 We took our chance with one of the outdoor tables at Raul’s.  I say “took our chance” because you are literally sharing the parking lot with cars driving in and out right next to you.  “Look out!” I screamed while Tracy scooted in her chair just in time so a car could graze past her seat to park.  And remember, these are teenagers driving!  They are all teenagers!  These are texting, multitasking, self-absorbed things parking their vehicular-weapons right aside you and your burrito!  You are taking your chance here on a Saturday night, adding in the drinking factor.  But this was nothing if not a night of chances.

Payment at Raul’s can be confusing. To compare each place fairly, we decided to order the same menu items from both places:

The price came out the same for both, about $20 for all of this  food.  At least CTS’s are cheap, that’s for sure!  Our smorgasbord looked like this:

Here are the results:

The California Burrito.  Why do Californian’s put french fries in their burritos?  That’s so gross!  California isn’t known for french fries.  We’re known for quinoa, beet greens, avocado ice cream…interesting stuff.  Not french fries.  Regardless of its stupidity, the unanimous winner was Filiberto’s on this one.  It had significantly more stuff inside and tasted a bit better.

The Rolled Tacos were presented slightly different.  Filiberto’s (shown on the right) with lots of cheese, and Raul’s (on the left) with more guacamole.  Both tasted like…rolled tacos.  OK, let’s split hairs.  Again, Filiberto’s came with more stuff on it, but because of this, Raul’s rolled tacos were crunchier.  But honestly, a rolled taco, is a rolled taco.  Great at 1:00 am when you are drunk.  Disappointing any other time of day, or sober.

The Breakfast Burrito.  Both use french fries for their potatoes.  Ewww!  So disappointing!  Neither burrito was good.  None of us liked them.  OK, ok, my youngest really liked his.  But no one over 12 years old liked them.  No one with a mature pallet such as moi!  Raul’s grills the outside of their burritos better, so if we had to pick, Raul’s wins for grill marks.

Bean and Cheese Burrito.  We put the bean and cheese burritos through our last test.  Neither came with a significant amount of cheese.  Actually, there was no cheese in my end pieces at all, but the middle pieces had some.  So equal low points for poor cheese distribution.  The beans in Filiberto’s tasted like canned mush.  But wait!  What was happening inside Raul’s burrito?  Could these be whole beans I see?  Not from a can?  I ran up to the window at Raul’s and ecstatically asked, “Tell me!  Is it true?  Are your beans made from scratch?” The lady at the window, not at all understanding my inappropriate amount of excitement, suspiciously answered, “Yes, my mom makes them fresh here everyday”.  Yippee!

Being a bit of a cynic, (not a snob, I didn’t say snob!), about CTS’s myself, I decided to take my questions to the street.  I needed to ask some real live locals their thoughts.

“Why did you choose Raul’s over Filiberto’s tonight?” I asked a couple of true burrito-eating-dudes in line.

Answer: “The quality is much better, and Raul’s is a local icon.” Fair enough.

I ran over to Filiberto’s and rudely interrupted a family’s dinner with the same question.

Answer: “It’s brighter in here.  And we like the hot chips” Well yes, considering the parking lot in front of Raul’s is in the dark, that was a good point.  Don’t know about the chips, but don’t you suppose that the chips are hot at both places if your timing is right? “And can you now leave us alone?”.  Um, yah, sure.

Bottom line:  I stand with my original opinion:  ALL CRAP TACO SHOPS ARE THE SAME.  But if I were alone in a dark alley with a heavily tattooed gang member high on crack, pressing a switch blade to my temple, the winner I would pick is… Raul’s.  All because of cute, little, bean-making, Mamá Emma. She’s the real deal.  I will now be partaking in another smorgasbord that includes Gas-X, Pepto Bismol and Tums, before hitting the hay. 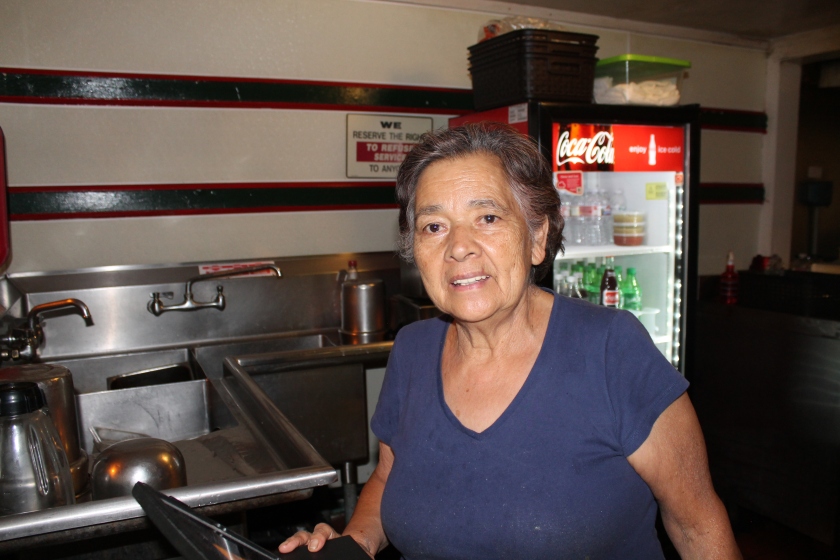 Walking in, I was over the moon with the sign I saw:

FINALLY someone is selling organic frozen yogurt without all of the artificial stuff in it! I first tried the vanilla.  It was… meh.  Not great, not terrible.  The organic cocoa wasn’t good.  I’ve never seen Hubby turn down chocolate anything before, but he wouldn’t even finish his sample.  I did like the tart, but not enough to get any.  Darn it, I was hoping I would LOVE this yogurt!  Hubby said that every flavor he tried was the worst taste of that flavor he’s ever had, except the peanut butter.  He ordered a peanut butter.

The topping bar looked good, and you gotta love a great sign: 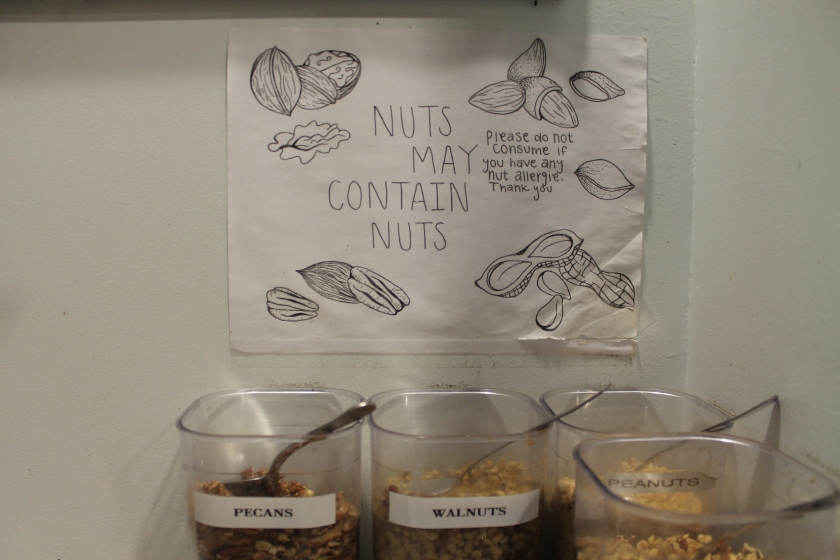 Their juices, teas, coffees and acai bowls sounded great.  They use lots of health-trendy words like “gluten-free, vegan, organic and Oreo”.

Bottom Line: Although I didn’t love the yogurt, I am thrilled to take my non-discerning kids here for a healthier sweet, frozen treat. 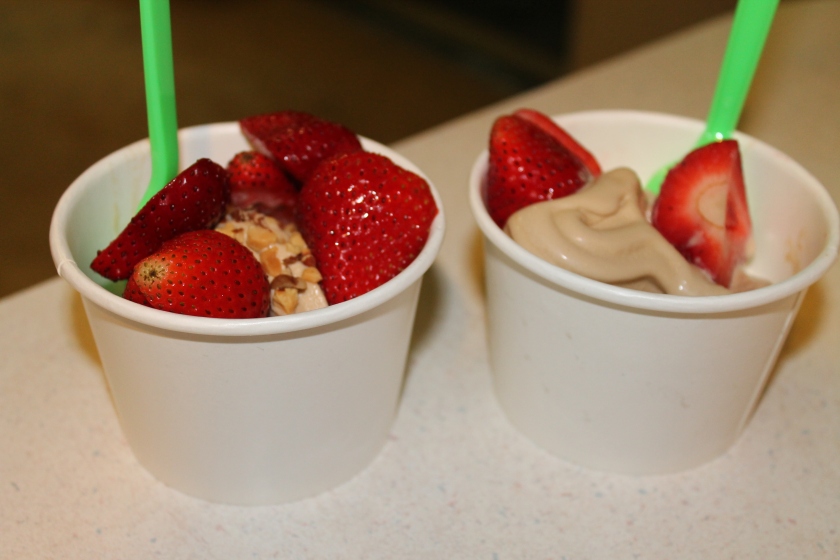